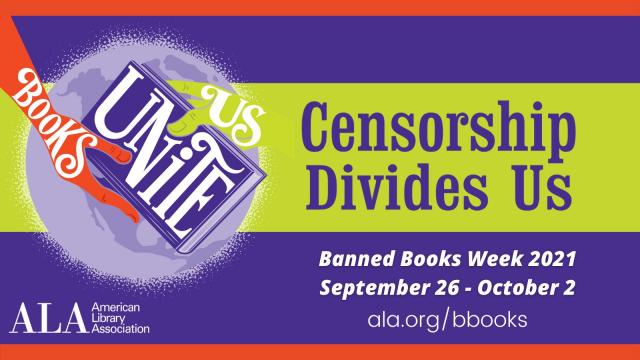 Throughout the country, most children are starting a new academic year. Teachers are sending out their lists of required readings, and parents are beginning to gather books. Unfortunately, in some cases, classics like "The Adventures of Huckleberry Finn," "The Catcher in the Rye," and "To Kill a Mockingbird" may not be included in the curriculum or available in the school library due to challenges made by parents or administrators.

Since 1990, the American Library Association's (ALA) Office for Intellectual Freedom (OIF) has recorded more than 10,000 book challenges, including 323 in 2016. A challenge is a formal, written complaint requesting a book be removed from library shelves or the school curriculum. About half of all challenges are material in schools or school libraries, and one in four are material in public libraries. OIF estimates that less than one-quarter of challenges are reported and recorded.

It is thanks to the commitment of librarians, teachers, parents, and students that most challenges are unsuccessful, and reading materials like "I Know Why the Caged Bird Sings," "Slaughterhouse-Five," the Harry Potter series, and The Hunger Games series, remain available.

The most challenged and/or restricted reading materials have been books for children.  However, challenges are not simply an expression of a point of view; on the contrary, they are an attempt to remove materials from public use, thereby restricting the access of others. Even if the motivation to ban or challenge a book is well intentioned, the outcome is detrimental. Censorship denies our freedom as individuals to choose and think for ourselves. For children, decisions about what books to read should be made by the parents who know them best!

In support of the right to choose books freely for ourselves, the ALA and Great River Regional Library (GRRL) are celebrating Banned Books Week (September 26-October 2, 2021), an annual recognition of our right to access books without censorship.

American libraries are the cornerstones of our democracy. Libraries are for everyone, everywhere. Because libraries provide free access to a world of information, they bring opportunity to all people. Now, more than ever, celebrate the freedom to read at your library! Read an old favorite or a new banned book this week.

Here are the top 10 challenged books of 2020 that you can check out and start reading now with GRRL. Click the title to go to the book in the GRRL catalog:

1. “George,” by Alex Gino
Challenged, banned, and restricted for LGBTQIA+ content, conflicting with a religious viewpoint, and not reflecting “the values of our community.”

2. “Stamped: Racism, Antiracism, and You,” by Ibram X. Kendi and Jason Reynolds
Banned and challenged because of the author’s public statements and claims that the book contains “selective storytelling incidents” and does not encompass racism against all people.

3. “All American Boys,” by Jason Reynolds and Brendan Kiely
Banned and challenged for profanity, drug use, and alcoholism, and because it was thought to promote anti-police views, contain divisive topics, and be “too much of a sensitive matter right now.”

4. “Speak,” by Laurie Halse Anderson
Banned, challenged, and restricted because it was thought to contain a political viewpoint, it was claimed to be biased against male students and for the novel’s inclusion of rape and profanity.

5. “The Absolutely True Diary of a Part-Time Indian,” by Sherman Alexie
Banned and challenged for profanity, sexual references, and allegations of sexual misconduct by the author.

6. “Something Happened in Our Town: A Child’s Story About Racial Injustice,” by Marianne Celano, Marietta Collins, and Ann Hazzard, illustrated by Jennifer Zivoin
Challenged for “divisive language” and because it was thought to promote anti-police views.

7. “To Kill a Mockingbird,” by Harper Lee
Banned and challenged for racial slurs and their negative effect on students, featuring a “white savior” character and its perception of the Black experience.

8. “Of Mice and Men,” by John Steinbeck
Banned and challenged for racial slurs and racist stereotypes and their negative effect on students.

9. “The Bluest Eye,” by Toni Morrison
Banned and challenged because it was considered sexually explicit and depicted child sexual abuse.

10. “The Hate U Give,” by Angie Thomas
Challenged for profanity, and it was thought to promote an anti-police message.

Plus, watch this clip from ALA on the top 10 challenged books of 2020.