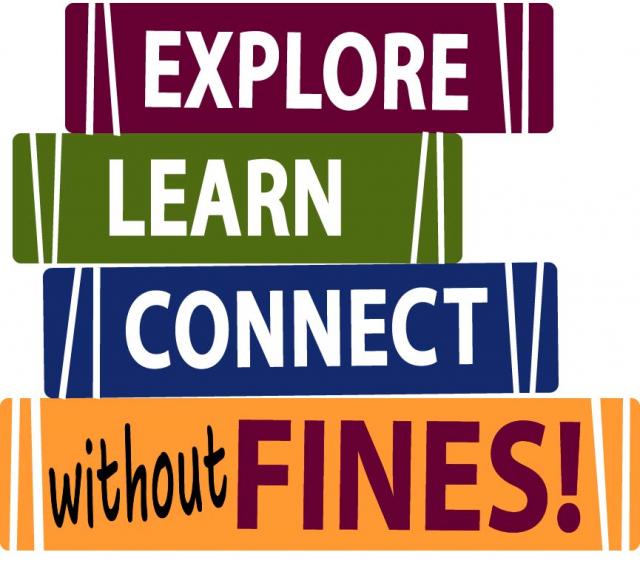 The library is preparing for BIG NEWS in 2022! GRRL is going Fines Free!

Do you want to be a part of GRRL’s fines free efforts? Give to the Year-End Campaign to pay it forward!

With this change, no fines will accrue on overdue materials! All 33 library locations will be free, open, and welcoming to all. With the help of the library’s generous donors, we can remove the financial barrier of fines to allow everyone to explore, learn, and connect in their community.

Starting on Monday, January 3, 2022, Great River Regional Library (GRRL) will be eliminating overdue fines on checked-out library materials. This initiative began back in 2019 with the elimination of overdue fines on children and teen materials. Through research conducted nationwide and local research conducted by St. Cloud State University Survey Center and GRRL’s user/non-user surveys, we have identified transportation and finances as the most significant barriers to the people who need library services the most. For those who rely on transportation by the public or a parent, returning materials on time can be difficult. Then when fines begin to accrue after the due date, it becomes another expense for a family. Being mindful of our diversity, equity, and inclusion efforts, we are working to eliminate this barrier for families in central Minnesota.

Great River Regional Library is a joint powers organization with six member counties of Benton, Morrison, Sherburne, Stearns, Todd, and Wright. Each county provides representatives for the GRRL Board of Trustees, and the Board develops and administers one comprehensive budget for the system. The 2022 budget supports the expansion of the library’s fines free initiatives. These fines are a declining revenue source and make up only 1% of the budget. In addition, they are neither guaranteed nor reliable; therefore, the Board moved forward with the effort.

This expansion aims to reduce the financial barrier that may prevent patrons from accessing library materials and increase the amount of time our staff spends positively assisting library users. Library cardholders are responsible for returning or renewing their checked-out materials by the due date so other patrons can enjoy them; charges will only apply for materials that are damaged or lost. Libraries across the country that have already done away with overdue fines have not seen a drastic increase in items returned late upon going Fines Free. For example, Chicago Public Library saw a 240 percent increase in returned books in the month after they eliminated fines in September of 2019, and Salt Lake City’s Public Library saw late returns drop from 9 percent to 4 percent after fines were eliminated.

If late fines have never prevented you from using your library, the library asks you to consider paying it forward. The library’s Year-End Campaign is an opportunity to give back and show your support of your library going Fines Free. With the help of generous donors, we can remove the financial barrier of fines to allow everyone to explore, learn, and connect in their community.

SUPPORT THE FINES FREE EFFORTS WITH THE YEAR-END CAMPAIGN HERE.